The saying goes that Jerusalem is about 40 miles and 200 years away from Tel Aviv. So its always a welcome reprieve to drive less than one hour from the monochrome ancient city of Jerusalem and to arrive in colorful and modern Tel Aviv, with its beachy vibes, exposed butt cheeks (it’s the year of the butt over there, I tell you!), interesting architectural choices, hipster cafes and bars, and superb restaurants. We’ve gone about twice a month for the entirety of our post. But unlike Jerusalem, which I’ve explored fairly thoroughly, when I go to Tel Aviv, I have a few things that I do over and over again. Things I cannot do in Jerusalem. So I present to you my “Perfect Tel Aviv Day” guide. If you’re traveling to Tel Aviv for the first time, these may not be the things you want to do, because maybe you have good yoga studios and Mexican food where you live. Perhaps you want to visit the Tel Aviv Museum of Art, a place I always meant to get to, but somehow never did, or you want to dance at one of the many nightclubs, places I never meant to go to and sure enough, never did.

Here is how I Tel Aviv:

Jerusalem’s yoga scene is miniscule. There is one studio I go to now and again. I hear there’s a second studio, but somehow have never come across it.  In a city of nearly one million people (it’s much larger, population-wise than Tel Aviv) this yoga studio-per-person quotient is woeful. But Tel Aviv is ripe with great yoga studios! I love Studio Sol in the hip Florentine neighborhood, but I find myself going back again and again to Ella Yoga in the Tel Aviv Port. This studio is right on the water and all the teachers are good, but I especially love Shelley, who teaches an 11am Sunday class that is equal parts athleticism and spirituality. It’s sweaty and beautiful. 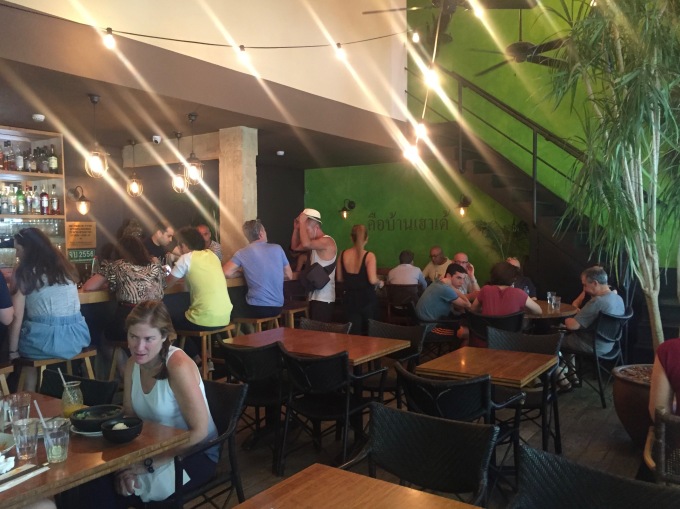 After a sweaty yoga class there is nothing better than a ginger-heavy cocktail or icy beer, a refreshing green papaya salad and a spicy noodle and tofu dish, so I usually walk a few blocks to Nam where I get my Thai-inspired fill of deliciousness knowing that it could be another month before I eat like this, because Jerusalem is lacking in the pan-Asian category. (There is Station 9 in Jerusalem that is decent, and Sushi-Ya is very good, but that’s about it). If I’m not noshing at Nam, then its Hanoi, a tiny little hipster spot with a creative menu that goes beyond Vietnamese dishes and is quite vegetarian-friendly.

The best thing about Tel Aviv – and it’s a city with lots of awesome things – is its epic Mediterranean coastline. The entire city coastline has a lovely paved path, perfect for long walks, rollerblading, or biking. Strolling the coastline is an activity in an of itself. You’ll probably get hit on by a guy a scooter. You’ll maybe want to stop for a coffee or a spritz along the way. Then, set up on the beach and read a book or continue to look at the beautiful people with the tans and the svelte bodies that go hand-in-hand with living in a beach town and subsisting on that good Mediterranean Diet. I have no real preference in beaches. I’ve sampled them all from the Tel Aviv Port to the Jaffa Port, skipping only the partially obscured beach reserved for the religious. But I’ve always found an irony knowing that beach exists some 100 yards from a beach where a dude with minimal body fat and an even more minimal Speedo is playing a pop-pop-pop-pop game of matkot with his equally ripped and scantily clad lover. 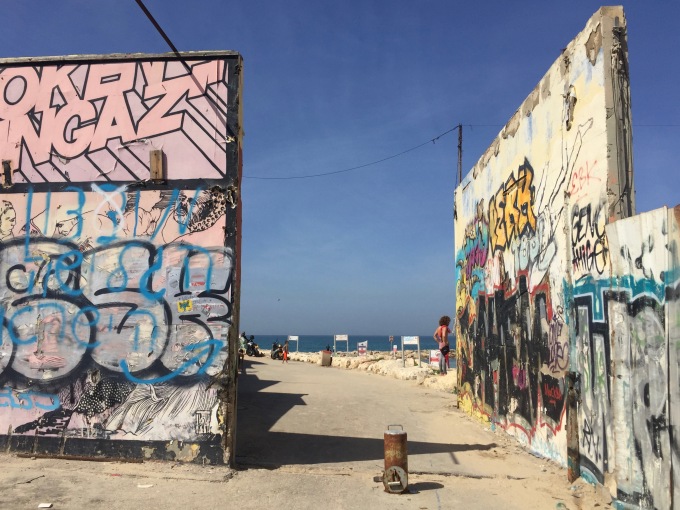 Jaffa, which is either its own city or a neighborhood in Tel Aviv, depending on who you ask, is the prettiest part of Tel Aviv. Its Arab architecture – stone streets, stone buildings, keyhole windows, minarets and mosques – all super close to the water, is as photogenic as could be. It’s a delight to stroll among the streets and alleyways, trying to find that Jaffa orange tree suspended in mid-air, duck into expensive custom jewelry shops, and sip a juice or a cocktail to cool off. The Jaffa flea market area is adorable, and there are lots of beautiful home decor and clothing boutiques dotted around the market itself. I especially love BoBo, a boutique that designs and sews its own funky fresh dresses. Then, have drink in one of the many Instagrammable cafes/bars – like Shaffa or Cafe Puaa — which decorate using pieces from the flea market, imparting on the whole area a colorful bohemian vibe. (Here’s a much more complete blog post about shopping/eating in the Jaffa flea market). 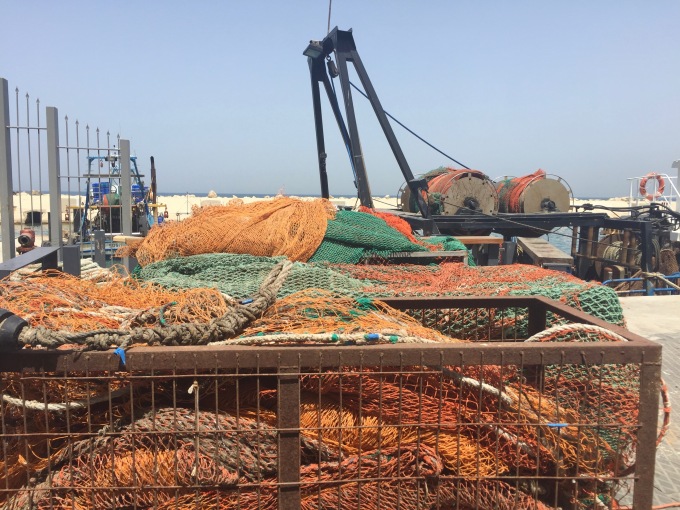 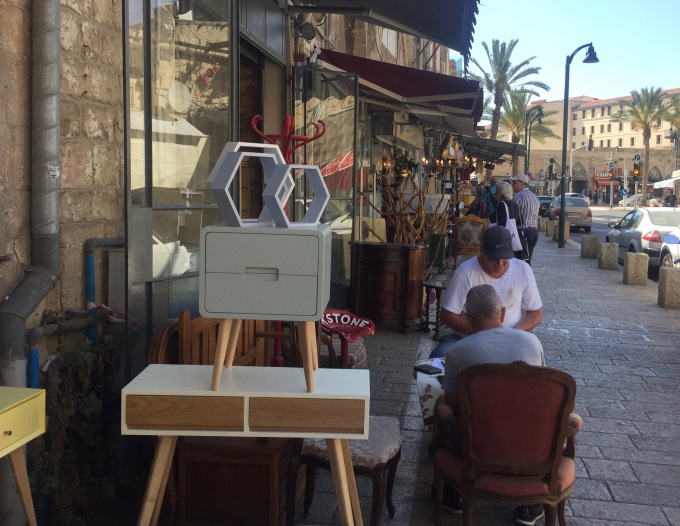 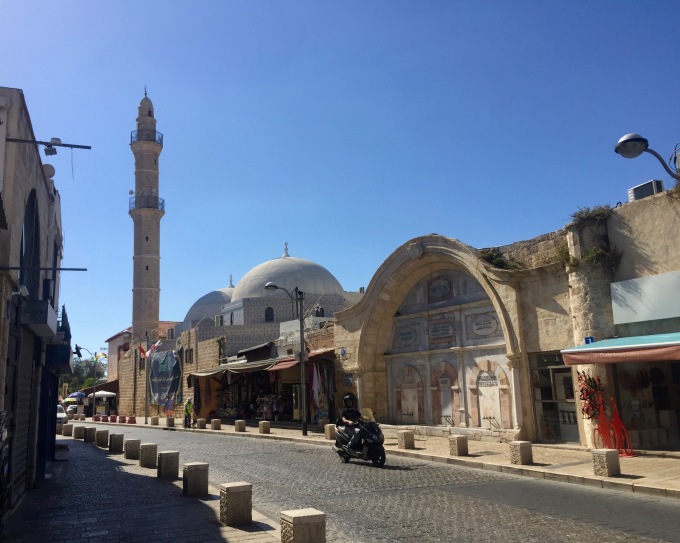 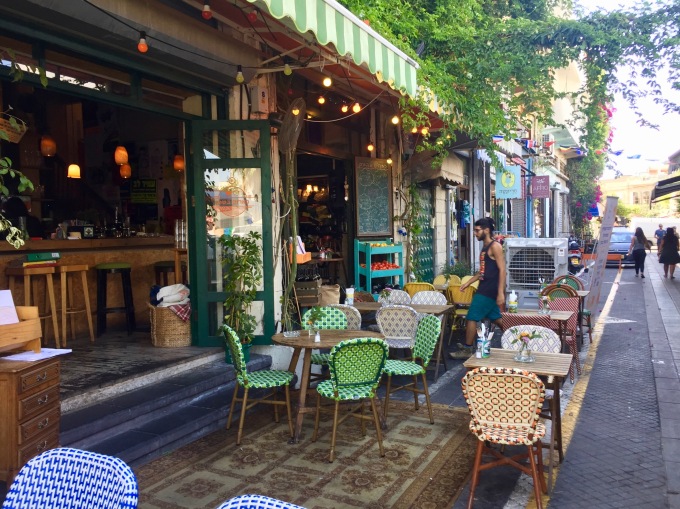 Okay, while there’s a lack of Asian food options in Jerusalem, there are not any Mexican food options, unless you count that kosher burrito place and I do not. There are a few Mexican restaurants in Tel Aviv and I’ve tried them all but my favorite is Mezcal. Mr. Em in Jerusalem and I discovered Mezcal on that magical day where we found The Most Beautiful Sofa in the World and we’ve been smitten ever since.  I know I should explore the dining scene in Tel Aviv a little more, branch out and try a place I’ve never been, like that vegan Georgian place everyone raves about, but if I’m with the husband, he will flatly refuse and just want to go grab a seat at the bar at Mezcal, order one item from each menu category (taco, tostada, quesadilla, and sometimes enchilada) and sip a margarita until the food arrives. Mezcal ain’t fancy: It’s decorated with graffiti of Mexican wrestlers and a TV is usually playing a sports game, the smell of weed is always wafting in from the street, and it’s mostly bar seating. We love it dearly and we’ll miss it.

And for That Local Flavor…

There is so much good food in Tel Aviv, it’s just that I only ever want Mexican or Thai because we can get plenty of good Israeli food in Jerusalem. But, if I were to recommend one knock-your-socks of place for Israeli food that really captures all the great things about Tel Aviv – the hip, young and casual vibe, the fresh food – it would be Night Kitchen. They have a tasting menu that is a steal compared the sky-high prices of pretty much everything in Israel. Whether you’re vegetarian, eat just fish, or eat it all, the waitstaff is incredibly accommodating and will lavish you with endless dishes such as pillowy Bulgarian bread with heavenly spreads, tomato confit carpaccio, gnocchi, a smokey charcoal-colored eggplant spread,  and their well-known ice cream créme brulée pops and banana crumble for desert. We once tried to wow our friends with several Jerusalem restaurants, but after going to Night Kitchen on their last evening, they declared it their best meal of the trip by a landslide.

Israel is great for “salads” and it’s lot of fun to go to an iconic place in Tel Aviv like Old Man and the Sea, order a whole fish, and get the bazillion accompanying salads.

For a more refined and delicious take on this concept, I like Manta Ray, a beautiful oceanside restaurant that takes the salad game up to a whole new level. The waiter brings you over a barcart teeming with dishes like beets and fried goat cheese or fried zuchinni with rich tzatziki and you point at the ones you want and they’ll bring you freshly made versions.

I’m going to miss Tel Aviv. It’s true that it has mostly been the escape valve location for us for these past few years, a place that in many ways is Jerusalem’s opposite. But even without that contrast, it’s a great city that is lively and fun. And delicious.