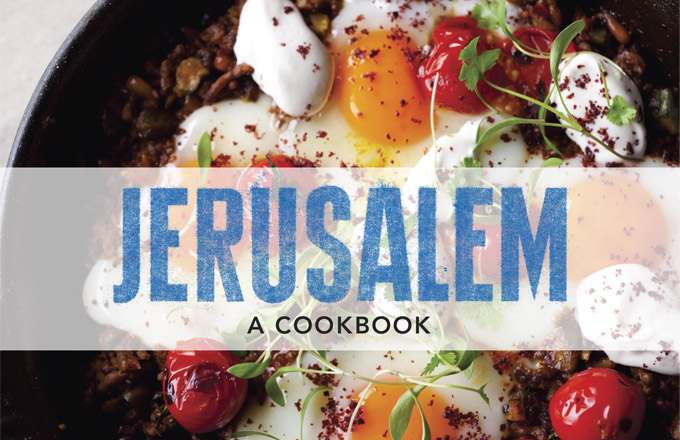 Surprised? Remember back when I painstakingly outlined all the pros and cons of moving to seven different cities and asked ya’ll to vote? Well, the winner, Lima, Peru, and all the rest of the places for that matter — London and Papau New Guinea among them — didn’t pan out. We were without a “onward assignment,” until Mr. Dame in Spain heard about a public affairs job open in Jerusalem. It’s the perfect job for him in a lot of ways, and I’m so excited that’s he’s going to get to do some of the diplomacy things he does best. He’s obviously already looking at Ultimate Frisbee options.

And you know what I’m looking at: the food! It’s been a bit of a struggle to in Spain to eat fresh and creative vegetarian food outside of our apartment. That won’t be the case in the Middle East. The hummus, the falafel, the eggplant, the stuffed vegetables, the olives, the fresh chopped salads!

One of my favorite cookbooks is Yotam Ottolenghi and Sami Tamimi’s “Jerusalem.” I’ve recently pulled this book off the shelf — it’s covered in olive oil fingerprints —  to get a small feel for our next city, which is, by all accounts, an extremely complicated place. The Israel-Palestinian conflict isn’t an issue I’m very well-versed in but I’ve been trying to learn more by reading articles and generally following the news (including the most recent Supreme Court decision on passports issued to Americans born in Jerusalem. The forward of the “Jerusalem” cookbook is one of the most compelling descriptions of the conflict I’ve read. Here’s an excerpt:

The diversity and richness of Jerusalem, both in terms of the cooks and their disparate backgrounds and the ingredients they use, make it fascinating to any outsider. But what makes this city doubly exciting is the emotional and spiritual energy that pervades it. When it comes to people’s emotions, it is hard to overstate how unique the city is.

Four thousand years of intense political an religious wrangling are impossible to hide. Wherever you go — in Jewish parts in the city or within the walls of the ancient Old City — people are zealously fighting to protect and maintain what they see as their piece of land, their endangered culture, or their right to a certain way of life. More often than not, this is pretty ugly. Intolerance and trampling over other people’s basic rights are routine in this city. Currently the Palestinian minority bears the brunt with no sign of it regaining control over its destiny, while the secular Jews are seeing their way of life gradually marginalized by a growing Orthodox population.

The other, more positive side to this coin is that the inherent passion and energy that Jerusalemites have in abundance results in some fantastic food and and culinary creativity. The best hummus joints, where methods have been perfected over generations, are in the city (and locals are happy to go into some seriously heated debates about the best one), as are some of the country’s most creative modern restaurants. There is something about the heated, highly animated spirit of the city’s residents that creates unparalleled delicious food…Alas, although Jersusalemites have so much in common, food, at the moment, seems to be the only unifying force in this highly fractured place…It takes a giant leap of faith, but we are happy to take it — what have we got to lose?- to imagine that hummus will eventually bring Jerusalemites together, if nothing else will.

That’s some exciting (and wildly optimistic) food writing right there, and it got me stoked to experience the flavors and the fascinating culture of Jerusalem.

What I’m not excited is that we have to leave Spain early. We don’t know quite when we’ll depart, but we likely only have a few months left in the Land of Ham before we’ll move to The No Man’s Land of Ham.

But hey, what is life if not a series of new adventures? And new foods.

Next year (actually, later this year) in Jerusalem,