You probably wouldn’t think that a longtime vegetarian would swoon over a restaurant with a name that translates to “Chop Room.” Yet, here it is. Mr. Dame in Spain and I were tipped off to the existence of this new foodie haven by the excellent 36 Hours in Madrid article in the New York Times.

The walls of Sala de Despiece are white subway tiles, the ceiling is pale blue and yellow styrofoam blocks, presumably to absorb noise while adding to the restaurants sparse/industrial aesthetic. There is an assortment of butchering tools hung on a wall (adorable, right?) The space is rather poorly set up – it’s cramped and narrow with very few options for sitting (one of which is reached by crawling under a counter).

But this place is undeniably cool, totally unpretentious despite its bona fide foodie cred, and the food is insanely good, simple, and creative.  I’m so stoked to have found a restaurant where the vegetarian options extend past a plate of cheese, a bland Spanish tortilla, or a cold soup topped with ham. (Because apparently a sprinkling of jamon is considered vegetarian in Spain). My meat-eating dining companions have gone nuts over the thin beef carpacio roll-ups, served flat with truffle pate and sea salt; the octopus; and the squid.

Also, the service is shockingly good for this being Spain, and for how crowded the place gets.

Here are three Sala de Despiece dishes I could eat once a week. (*Note: I’m just spitballing the names of these dishes, because the menu is handwritten in Spanish, and just lists the main ingredient and its origin.) 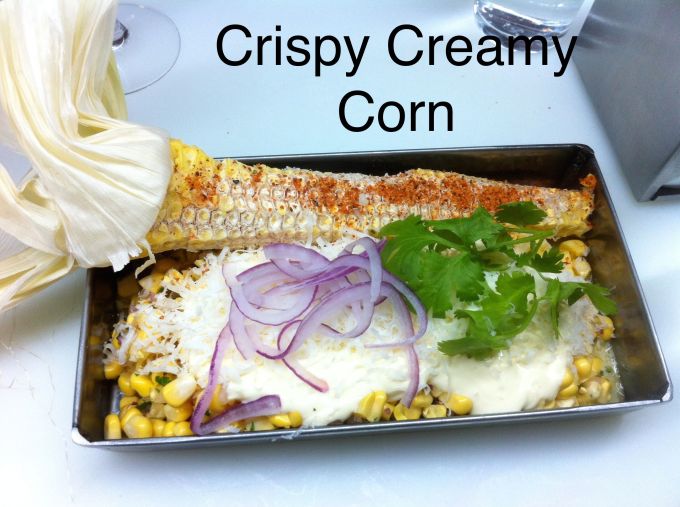 This is like the best creamed corn you’ve ever had, but way more sophisticated. Crisp sweet corn topped with what I guessed to be creme fraiche and a white cheese. A little squeeze of lime, some thinly sliced red onion, and cilantro. Fresh, sweet, crispy, tangy, creamy. 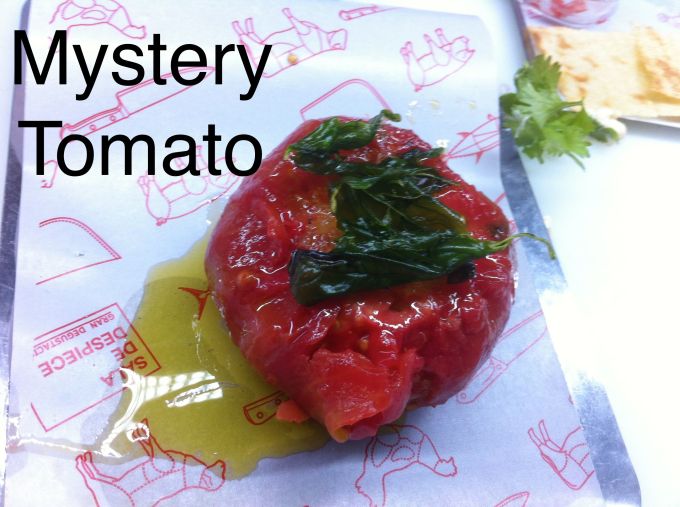 I wasn’t really sure what I was getting when I ordered “tomate” at Sala de Despiece. A whole raw tomato doesn’t seem super exciting. But  this one is rather interesting for just being a tomato. I call it a mystery tomato, because I’m not quite sure how they prepare it. But midway through bottle of wine number two on a recent visit and after a conversation with a waiter who used several verbs I had never heard of, I think the gist is: Peel a good ripe tomato and marinate it all day in its own juices, olive oil, salt, and sugar. Then serve with some flash-fried basil and sea salt.

Given my love for cheese and for creamy foods, I obviously order burrata (fresh cream-filled mozzarella) whenever it’s on the menu. And this is some of the best I’ve ever had. It pairs extremely well with the mystery tomato.

Madrileños: Check this place out immediately. But try to limit the size of your group and arrive early (maybe a tad before Spanish dinnertime) if you want a seat. They don’t accept reservations). Here’s the website.

(Note: For more Madrid recommendations, check out my post, The Dame in Spain’s Madrid Must-Sees).

To eating well (as a vegetarian) in the land of ham,