Jerusalem’s Old City always feels to me rather mysterious and dark, filled with masses of Christian tourists from Italy and the Philippines who are retracing the steps of Jesus, but also with thousands of residents retracing the steps of their parents and grandparents who walked the same slippery stones in the Old City.  Vendors sell two-for-one cotton granny panties, Elmo dolls made in China, three-foot tall loofah sponges, silver trays in dire need of a good shine, embroidered tunics, menorah keychains, gold necklaces, green plastic rosary beads, hand painted tile trays, T shirts spelling out your alma mater in Arabic or Hebrew, chess sets inlaid with mother of pearl and shipped from Syria. There’s plenty to buy, but more importantly: There’s plenty to eat. It just isn’t always obvious. The Old City doesn’t have a ton of sit-down joints. Most of the things worth eating in the Old City are served out of booths, or literal holes-in-the-wall. In my opinion, there are certain delicious eats that are synonymous with the Old City and they are:

Coffee or Tea in the Muslim Quarter

One of the best ways to take a break from walking in the Old City is stop for an Arabic coffee or a hot tea, served with mint in the summer and sage leaves in winter. The Muslim Quarter has a number of little coffee houses, and you’ll recognize them small stools and often the presence of hookahs (called nargila here). Sit on a stool and choke down some thick, bitter, cardamom-scented sludge and get a feel for how people actually live in the Old City – these little coffee shops don’t tend to get a ton of tourist action. I particularly like one called Musa on the Cotton Market street, very close to the Dome of the Rock, and there are also a few right inside Damascus Gate.

One of the great pleasures of the Middle East has to be its fresh yummy juices. While I’m more of a eat-my-calories than drink-my-calories type of person, (rule does not apply to alcohol) I sometimes make an exception for a bright and refreshing pomegranate-orange juice. There are probably no fewer than two dozen juice vendors in the Old City, and if you see they’ve got lots of fresh fruit around, you really can’t go wrong.

If there’s one iconic only-in-Jerusalem food, it would be the “Jerusalem bagel” (ka’ak in Arabic and baygeleh in Hebrew).  Don’t misunderstand: These elongated, slightly sweet, sesame-coated oblong breads don’t hold a candle to a New York City bagel. They are not really bagels at all (they’re baked, not boiled). But the Jerusalem bagel is all over town, and especially all over the Old City, where you have to make way for the bagel cart when it comes barreling town the narrow passageways.  For breakfast, tear off hunks and dip it in packet of za’atar, a spice mix of oregano, sumac, and sesame seeds. A stall by my apartment sells hardboiled eggs along side its Jerusalem bagels, but I’m still on the lookout for the stand that sells cream cheese, too.

You can eat hummus all over the region, from Jordan to Syria to Lebanon to Israel, and it’s all a little different. My opinion on the best hummus in Jerusalem is pretty firm at this point, but I still like to try to others just to double check. Old City hummus tends to be lemony and doused in a healthy glug of local olive oil. Most guide books will steer you toward Abu Shukri or Lina’s and you won’t be disappointed. I recently tried the hummus at Arafat and was majorly impressed the by tiny stall’s efficiency. I must have seen 60 individual bowls of hummus get prepared and delivered in the time I watched. (They also serve maklubeh, a chicken and rice dish adored by Palestinians).

Hani Zalatimo (the great-great-grandson of Mohammed Zalatimo who started the bakery in 1860)  tosses dough over his head to get it paper thin, fills it with a little crumbly cheese, and bakes the pastry, called mutabek, in an ancient oven. After, it’s treated with a little sugar syrup and dusted with powder sugar and the results is a flaky, savory, and slightly sweet creation. Devour your mutabek on a plastic table in a windowless, basement-like space that is lacking in charm to the point where it becomes charming.  (There’s probably no address for Zalatimo, but it’s very close to the Church of the Holy Sepulchre).

Kanafeh is the favorite dessert of Palestinians, and for a good reason. I describe it as a “dessert mozzarella stick” to Americans, and if that sounds kind of gross, it isn’t. It’s a layer of melted mozzarella-like cheese, topped with crispy shredded semolina and pistachios, served doused in sugar syrup (sometimes spiked with rosewater) and best served piping hot and melty.  Ask anyone in this region and they’ll tell you the best kanafeh comes from the West Bank town of Nablus. Jaffar in Jerusalem’s Old City is the best I’ve had. You’ll be served a slab of kanafeh from a huge round pan, and you can enjoy it at one of the many table in the brightly-lit shop.

For a classic Old City experience, duck into a good-looking spice shop and try some things. Don’t know what anything is? The owners will gladly explain, and likely offer you a mouthful of their local blend for seasoning chicken, fish, and rice, that contains all sorts of spices, dehydrated onions, and seeds. I recently bought a bunch of things from a  Sea of Herbs, located on the spice market street in the Muslim Quarter and owned by Isaac and Jacob Almouaket, brothers and six generation herbalists. In addition to spices, they have pomegranate soaps, as well as homeopathic remedies, like a house-made cinnamon, ginger, and clove gel that promises to eliminate all your muscle pains. (70 Attarin St., Old City).

The food in the Old City veers more toward the sweet than the savory and is largely carb-based street food. (And I didn’t event include falafel or shawarma, but you can get lots of that between those ancient walls).  It’s not the place to go when you want a nice sit-down meal. For a sit down in the Old City, I like Nafoura (Middle Eastern food in the Christian Quarter) and the Austrian Hospice (Austrian food  like schnitzel and apple strudel served in an garden oasis in a particularly hectic part of Muslim Quarter of the Old City). Come to the Old City for the bustle, to no doubt get lost, to buy some cool old trinkets, and to eat, eat, eat.

To eating in the Old City, 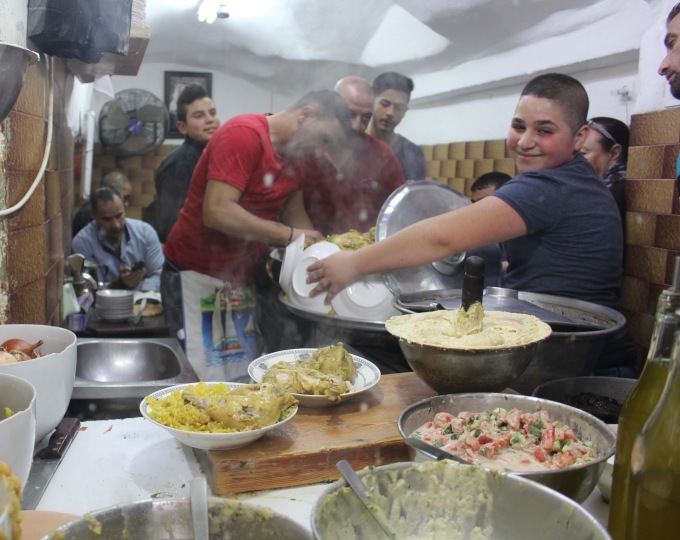 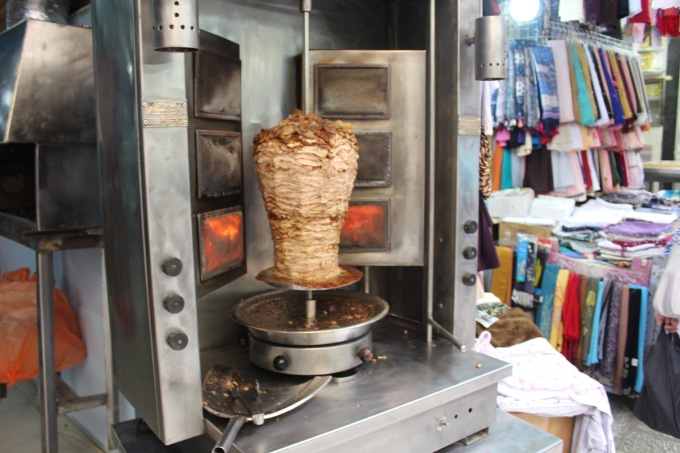 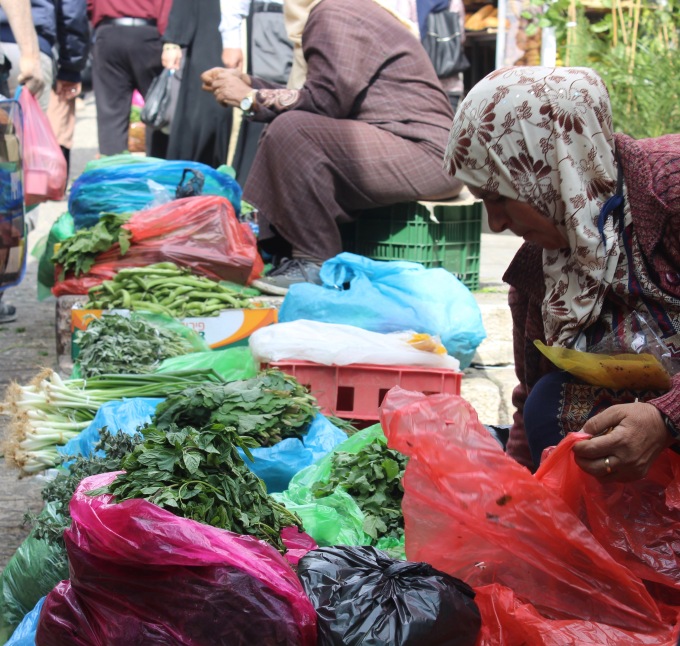