Prior to our recent trip to Colombia (a destination chosen by Mr. Em in Jerusalem), I can’t say I knew much about the country. We watched Narcos in preparation, and the Netflix series about notorious drug trafficker Pablo Escobar and his reign of violence throughout the ’80s and the early ’90s didn’t paint a pretty picture of the country. And while Colombia is still one of the world’s biggest cocaine producers, it is not the violent place it once was. And it’s quite beautiful.

(If you’re wondering why in the world a couple living in the Middle East would go to South America for a vacation, it’s because we had two weddings to attend in the U.S, two weeks apart. So we figured it would be a good time to pop over to South America, which, as far as the world goes, isn’t terribly far from North America).

We began our trip in the capital, Bogota. On our first day, we had a lovely lunch at Suna, split a bottle of wine, and I realized I was either really drunk or sick or a combo of both, and took to bed. Soon after, Mr. Em in Jerusalem’s Colombian friend said I probably had altitude sickness (Bogota is 8,675 feet above sea level, making it the fourth highest capital city in the world). I didn’t feel my best in Bogota, but still, I managed to eat a few tasty things (like traditional soup called ajiaco from La Puerta Falsa and empanadas from Abasto), catch up with Foreign Service and grad school friends, see some pretty sites, and, on our last day, took part in a harrowing but fun bike tour around the city (with Bogota Bike Tours), which included weaving through motorcycles and exhaust-sputtering trucks in a rather shocking red light district. 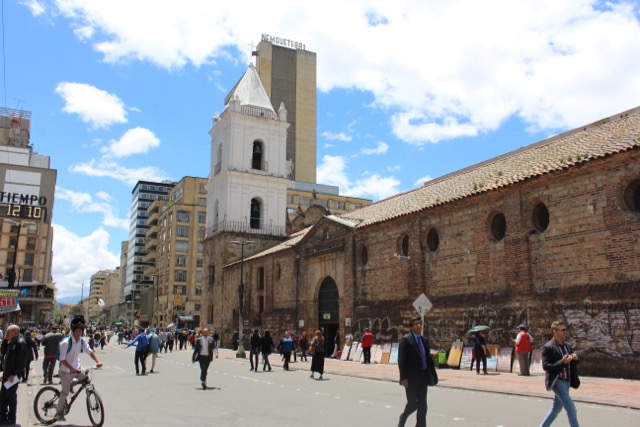 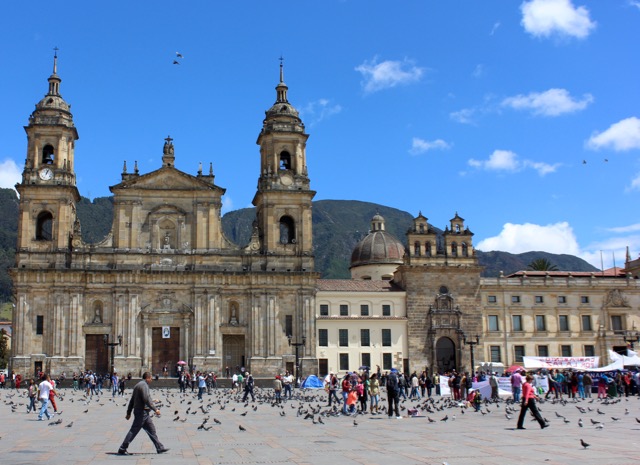 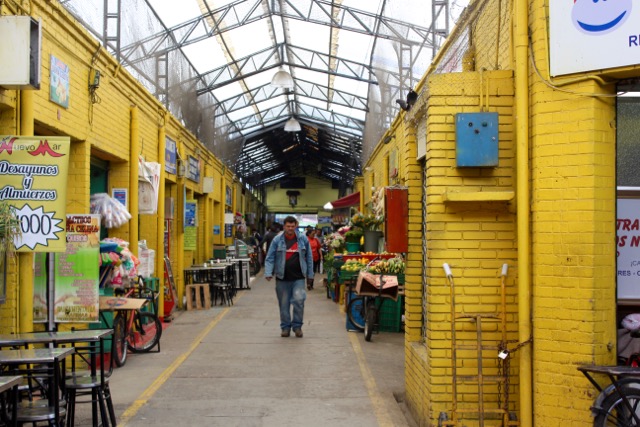 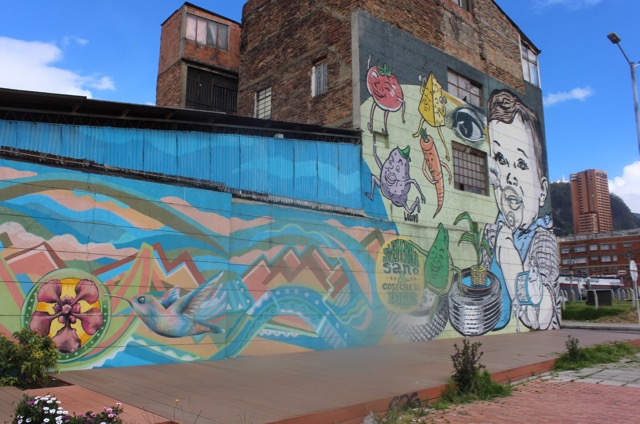 After three nights in Bogota, we took a short flight to the Caribbean city of Cartegena, which is Colombia’s fifth largest city, but certainly its most colorful. For two nights and three days, we sweated our asses off (the humidity, good God, the humidity), and gawked at all the picture-perfect pastel houses and the palenqueras, the brightly dressed ladies who carry fruit baskets on their heads. We also took several walking tours (a group one through Free Tour Cartagena and a private one with Duran Duran) in which we learned the fascinating history of the area, which involves slavery, uprisings, and the Spanish. (Interesting fact: The average Colombian has a mix of black African, indigenous, and white European ancestry). Also: We drank deliciously creative cocktails at El Barón and Demente, and ate well at the super atmospheric (think: Hemingway novel) La Vitrola and enjoyed a fun fancy pants meal at Miami-esque Marea. 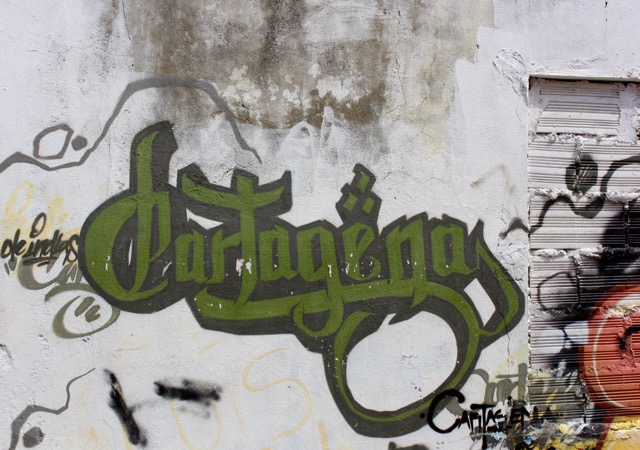 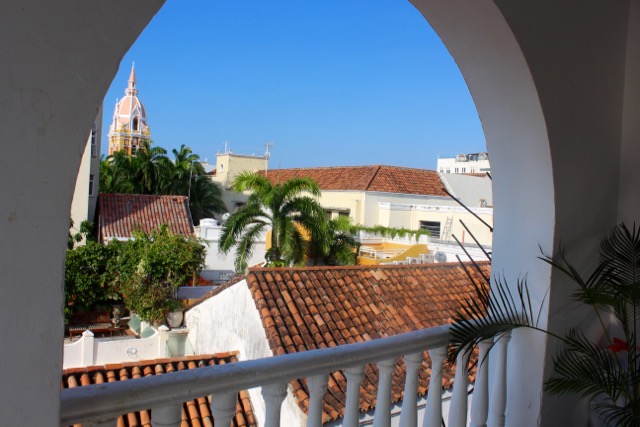 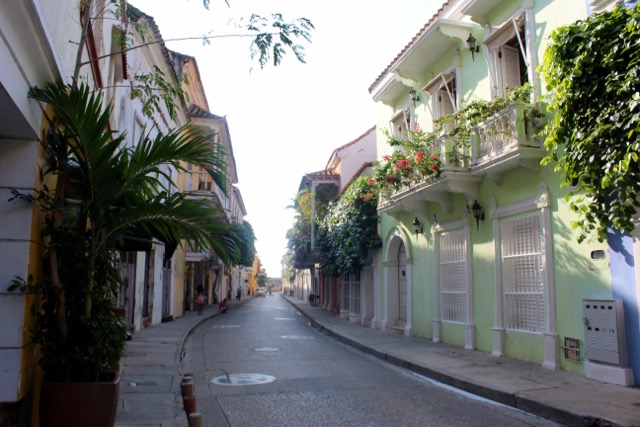 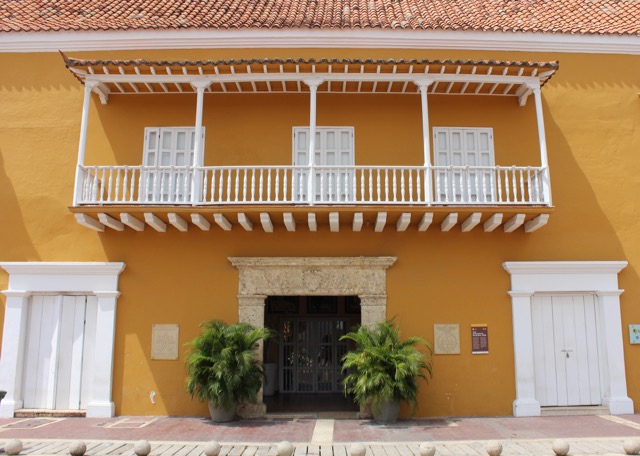 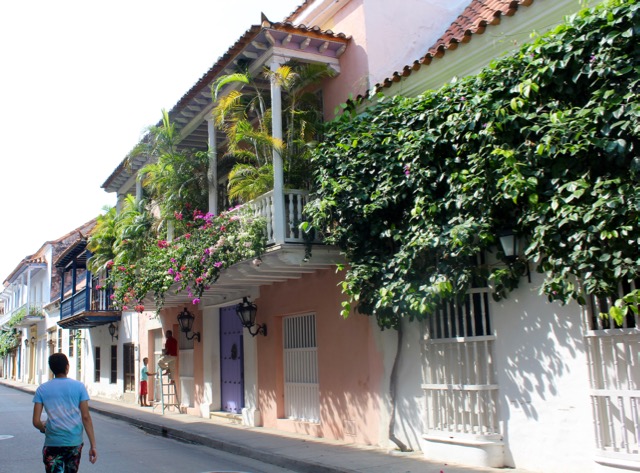 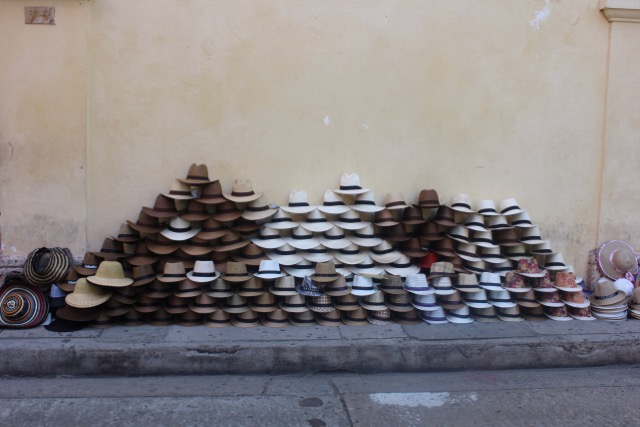 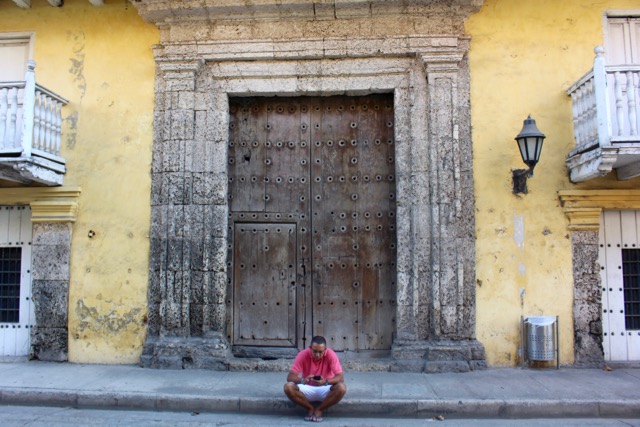 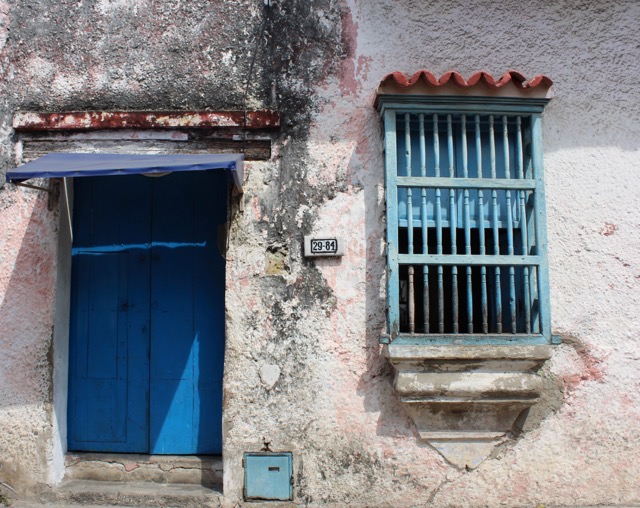 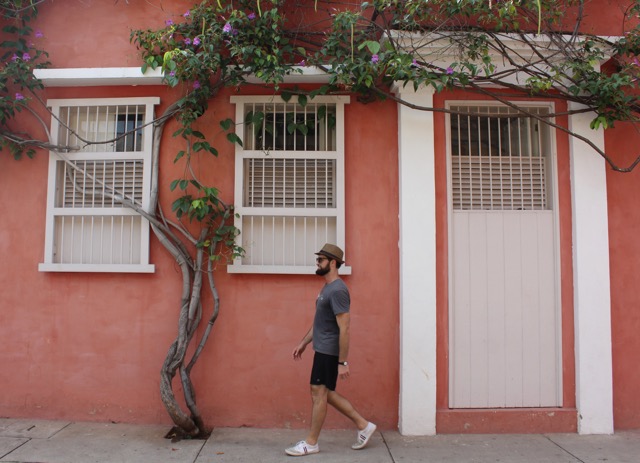 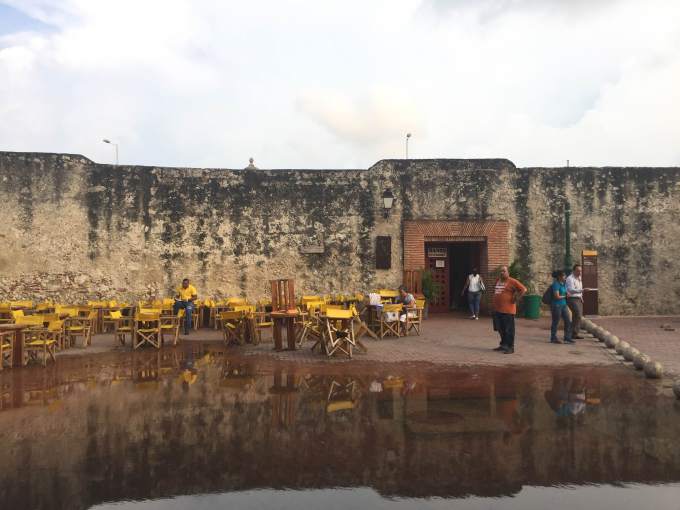 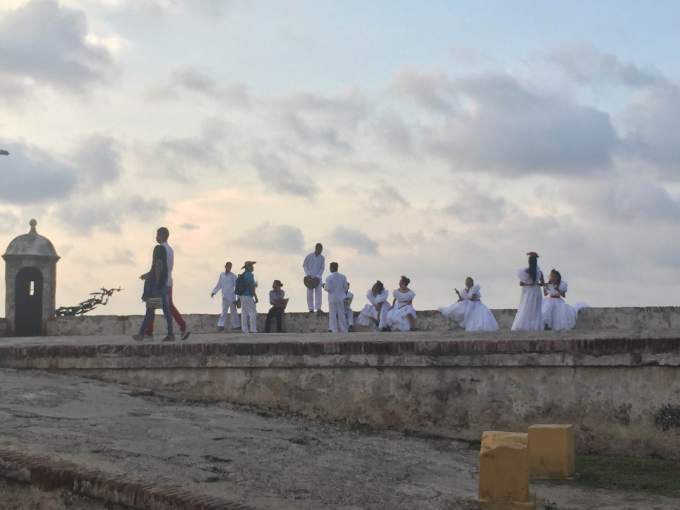 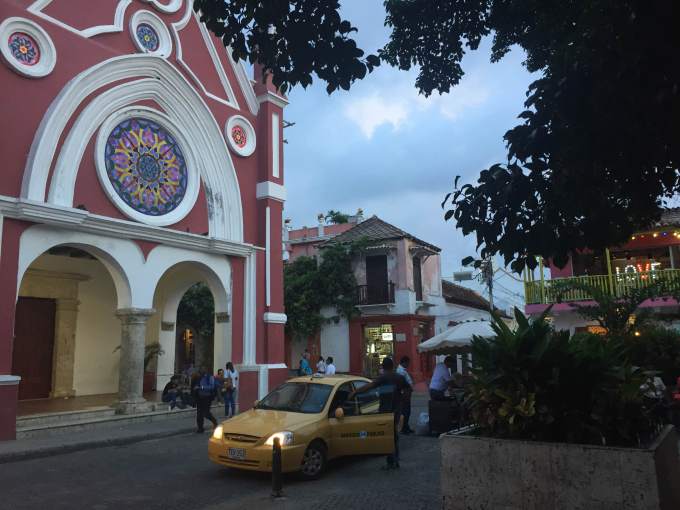 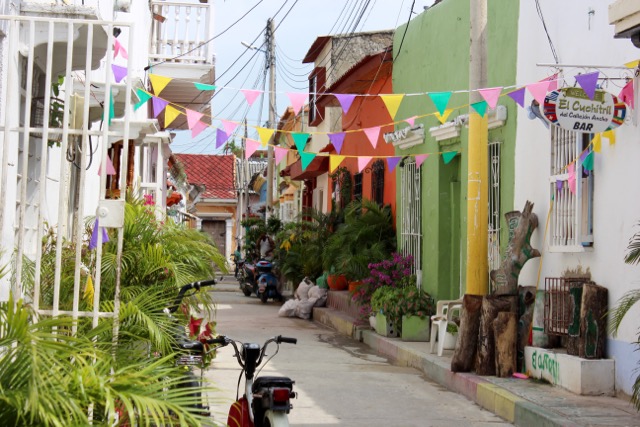 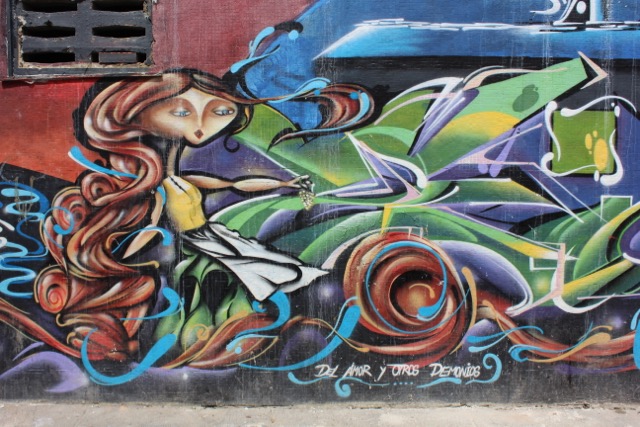 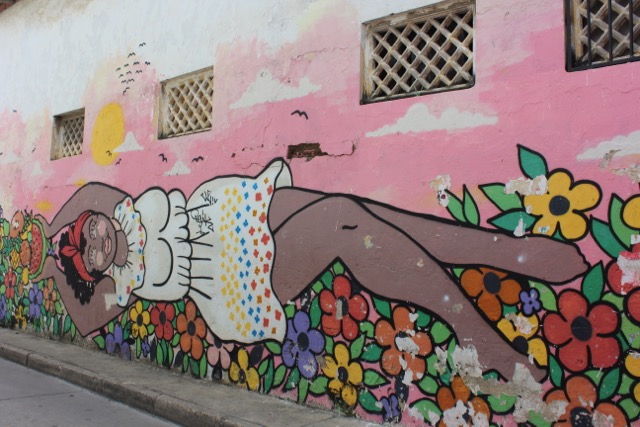 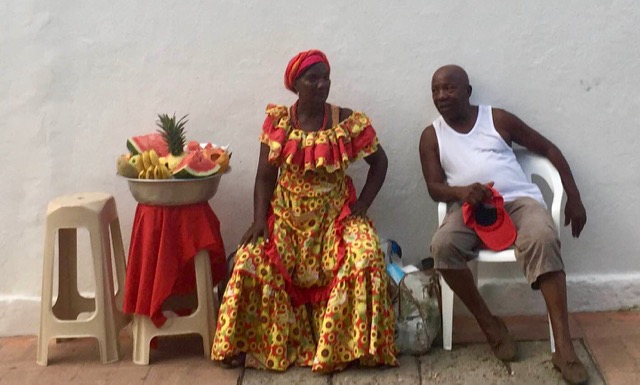 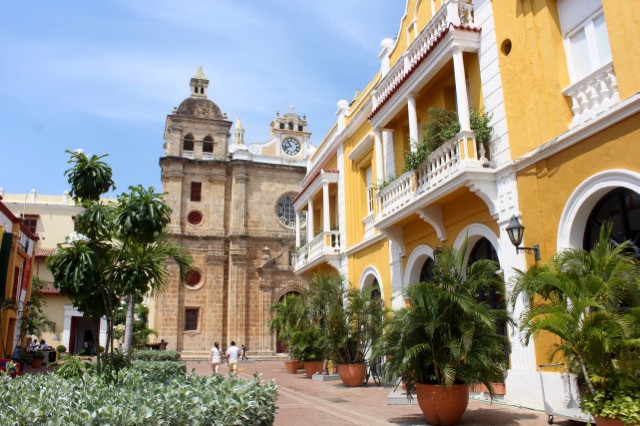 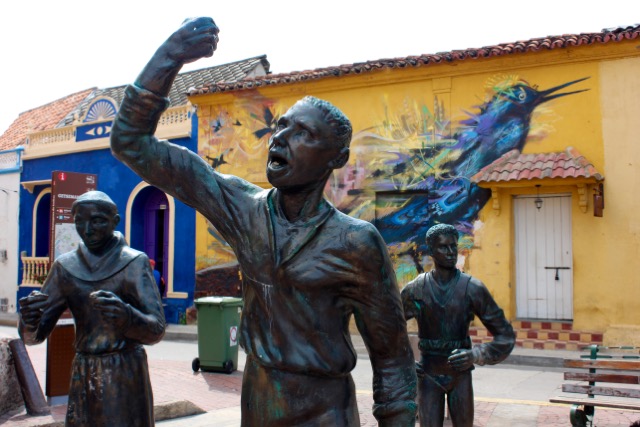 Our third stop was Medellin, Colombia’s second largest city and the one featured most prominitely on the TV show Narcos because it was Escobar’s hometown/site of his violent and notorious drug cartel. I wasn’t sure what to expect from the city that was the murder capital of the world two decades ago, and is the current top spot for butt implants. But I found Medellin to be a vibrant, lush, sprawling, safe, and its people to have normal sized posteriors. Medellin is beautifully situated in the central Andes Mountains, so that much of the city rises dramatically out of the Aburrá Valley. The drastic elevation changes in the Medellin has historically made getting around the city difficult and so residents are extremely proud of the city’s Metro system, which was built when crime was a very serious problem. Today, the transit system is a model of orderliness and safety. The city is also super proud of its cable car system that transports residents and tourists through what used to be one of the city’s worst slums, where residents were essentially trapped on account of their location on the side of a mountain.

Throughout Colombia, neighborhoods are ranked one through six on how nice/fancy/safe they are, with residents of the higher ranked barrios paying more taxes and utilities than the lower ones. We stayed in the Poblado neighborhood in Medellin, which is most definitely a six, with its pretty apartment buildings, leafy sidewalks and parks, and abundance of hipster restaurants, cafes, and shops. We enjoyed our coffee each day at the fabulous Pergamino, had an outstanding meal at Carmen. 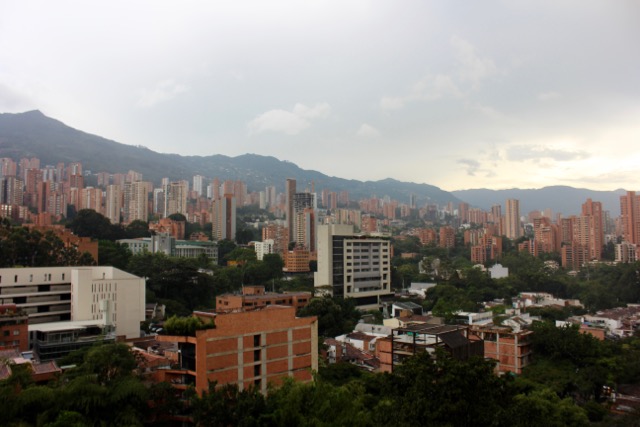 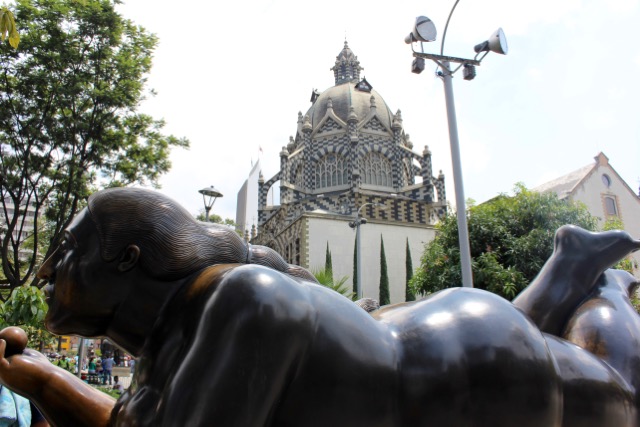 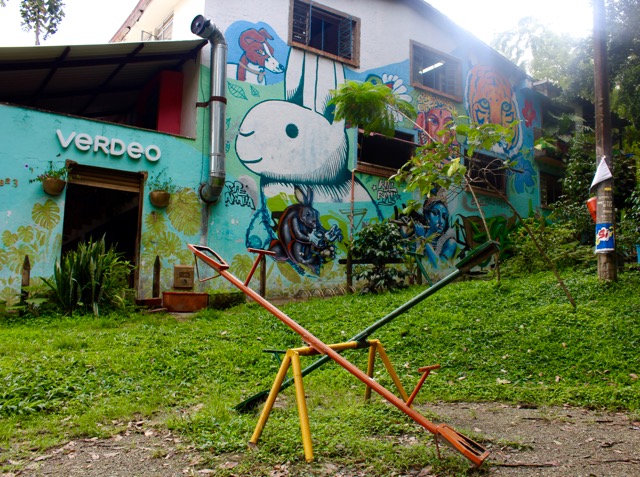 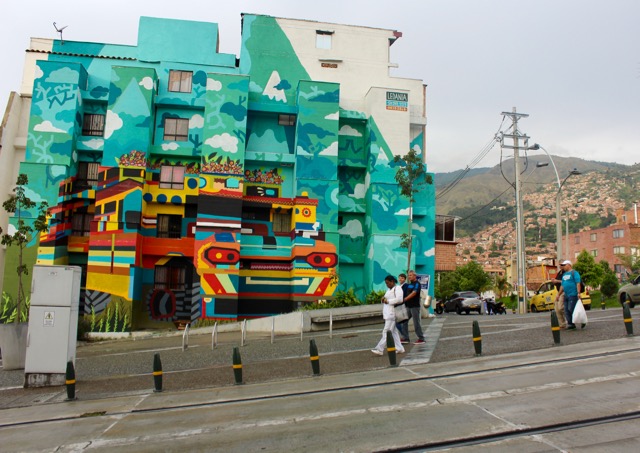 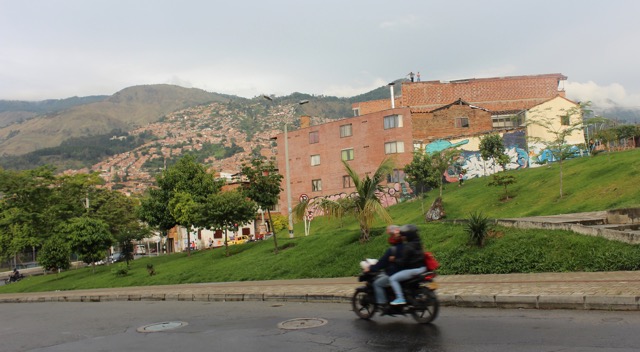 I felt a little like a bad tourist who has an idea of a place from a TV show or movie (flashback to my trip to the land of Sound of Music: Salzburg) because I couldn’t stop thinking about what the city must have been like during Escobar’s time. We talked to a number of Colombians during our trip and they all are pretty sick of talking about Pablo and would love to no longer have their city hold the reputation as the center for cocaine production and gang violence.

Our visit fell during a historically interesting time as a referendum that would have struck a peace deal with the Revolutionary Armed Forces of Colombia (FARC) was, surprisingly, voted down by Colombians. Most of the Colombians we spoke to (including some living in Bogota and a 19-year-old born after the major violence in Medellin) were embarrassed and saddened that their country “voted against peace.” The deal would have allowed FARC rebels to integrate back into society and avoid harsh prison sentences in exchange for stopping their killings/kidnappings/hiding the forests. However, we met someone in Medellin who was firmly against the peace deal because he, and many of the people he knows, don’t think violent rebels should get off with so light a punishment. As he said, “Peace without dignity isn’t peace.”

On our last day in Colombia, we went on an incredible excursion to a coffee farm two hours southwest of Medellin, but I’ll post that experience in a separate blog very soon.